"Savior, conqueror, hero, villain. You are all things, Revan… and yet you are nothing. In the end, you belong to neither the light nor the darkness. You will forever stand alone."

Star Wars Books You Should Read If You Like
Revan

When the Jedi Council of the Old Republic had become stagnant, indecisive, and set in their ways, Revan took the burden of saving the galaxy on his shoulders. Revan wouldn’t settle to let the galaxy suffer. He led millions to war without the Council’s permission.

Of course, he would eventually lose his way upon discovering hidden Sith secrets and realizing that the galaxy was in grave danger. Revan, the infamous Jedi-turned-Sith with a redemption story as complex and powerful that rivals even Anakin Skywalker’s, is at once an archetype of both the light and dark, conqueror and savior. On top of all that, he’s possibly the only Star Wars character who can beat Boba Fett in a costume contest. But perhaps Revan’s best trait is his legacy as a leader.

Rebellious Jedi would join ranks with him to take on the threat of the invading Mandalorians. Malak followed him into the Unknown Regions to learn of the Star Forge, the Unknown Planet, and even of the long-lost Sith Empire. The crew of the Ebon Hawk would follow him to find himself, defeat his own demons, and save the galaxy from Darth Malak’s tyranny. And we followed him, too, through countless hours of unforgettable Star Wars storytelling.

His breakout debut in Star Wars with 2003’s Game of the Year, Knights of the Old Republic, made millions of voices cry out in surprise and excitement as we learned the Sith Lord had been mind-wiped by the Jedi Council and utilized as a tool for the light side.

Accompanied by the very Jedi who had captured him in the first place, Bastilla Shan, as well as a star-studded squad including future Mandalore Canderous Ordo, Revan inspired many as he led millions to war, saved the galaxy, and looked good doing it!

‍
Unfortunately, if you’re looking for dozens of books and comics about Darth Revan, you’ll be left wanting. Besides the video game, its sequel, and the expansion to the SWTOR MMO, Revan is only featured in one Star Wars book.

Written by Drew Karpyshyn, head writer of KOTOR, The Old Republic: Revan canonizes (in Legends) the light side storyline of the game and bridges both it and KOTOR II with SWTOR. Besides that, Darth Bane: Path of Destruction (also by Karpyshyn) references Revan and KOTOR heavily as Bane rediscovers the glory and genius of the Sith Lords of antiquity.

John Jackson Miller’s Knights of the Old Republic ongoing series for Dark Horse comics bridges the ‘90s Tales of the Jedi comics with the KOTOR game, detailing the Mandalorian Wars, which is referenced heavily in the game, but focuses on failed Padawan Zayne Carrick and his crew of misfits on the run from overzealous but misguided Jedi Masters.

While Revan isn’t a main character, he does drop in mysteriously from time to time, and other key KOTOR characters have spectacular cameos as well.

In the meantime, we’re left with one book. One game. A brand-new Funko Pop, a Black Series action figure, a LEGO minifigure, and hopes for a Revan movie starring Keanu Reeves. One can dream. Revan certainly would! 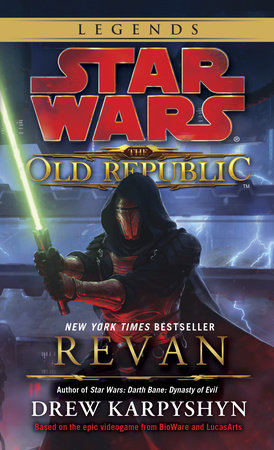 Being a Jedi turned Sith and finding redemption, Revan has become one of the most powerful Force users by practicing balance between the light and dark sides. Learning how he broke free of the dark side but continuing to draw on its power of his own will puts powerful Force use into perspective.

This novel takes place after the Knights of the Old Republic video game, starting with Revan and Bastilla contemplating their future together. But a threat to the galaxy begins to reveal itself, forcing Revan to leave his wife and unborn child behind to make sure the world is a safe place for his family in the years to come. On the way he encounters Scourge, a Sith strong in the dark side of the Force who intends to break his willpower. 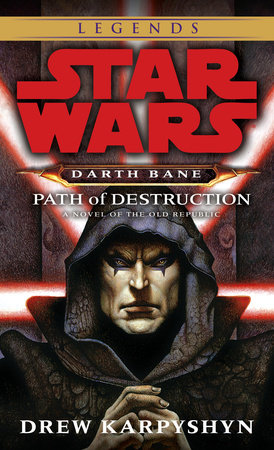 Every great story has a great villain; or, in the case of Star Wars, a great band of villains. Darth Bane: Path of Destruction focuses on one of the most indispensable Sith Lords in history and chronicles his rise to power as well as its reverberating effects on the future of the galaxy that culminate in the Emperor and Darth Vader.

Karpyshyn manages to flesh out a story that fans didn’t know they needed. It provides a better understanding of what it truly means to be a Sith. Even the most fervent fans of the Light Side will find themselves cheering for one of the most power-hungry villains in all of Star Wars as he claws his way from humble beginnings into a position of ultimate power. By the end of the first book, you’ll be scrambling to pick up the sequel. 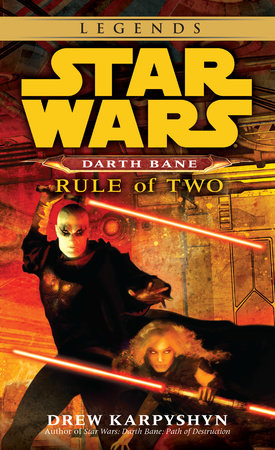 The history of the Sith was forever changed after Darth Bane's climactic victory at the end of the first book of his lauded trilogy. Decimated by the though bomb, the Order lay in ruins as a single master escaped the planet with his new apprentice, and thus, the Rule of Two was born. This novel continues the masterful legend of Bane as he simultaneously trains the newly appointed Darth Zannah and begins searching the galaxy for the most heralded objects of Sith lore: the fabled holocrons.

Bane's pursuit of this arcane knowledge is treacherous, to say the least, but his raw power and ironclad will encase him with an armor unlike anything the galaxy has ever seen. With his legacy at stake in the form of a brilliant young woman, Bane shows readers once again that he will stop at nothing to create the order that will one day destroy the Jedi once and for all. 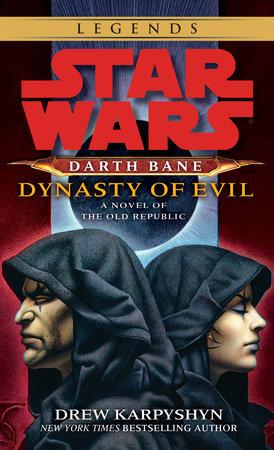 The final chapter of Darth Bane's legend allows the reader to witness just how magnificent and horrifying the ultimate power of the Dark Side can be. Decades have passed since Dessel escaped the Apatros mines to ascend to his rightful place as the Sith'ari, and as Bane begins to realize the true cost of such power, fear begins to fester within his mind.

But he is not the only one looking towards the future. Throughout this novel, Bane and Zannah transcend the titles of master and apprentice as they both attempt to ready themselves for the only end that the Rule of Two can offer them.

Will their dynasty continue? Or shall the Sith be lost to history? 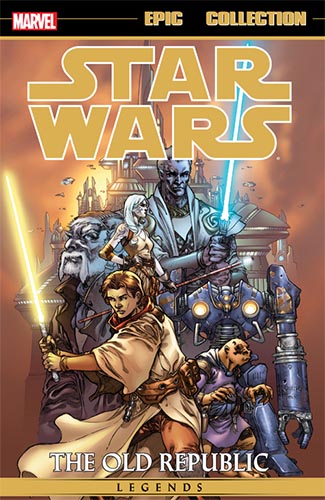 This massive comics collection begins legendary Star Wars writer John Jackson Miller’s seminal run of Knights of the Old Republic. Not to be confused with the video game of the same title, Miller’s comics focus on Jedi-on-the-run Zayne Carrick as he is framed for a massacre of Padawans. In order to survive and find who’s responsible, he is forced into an unconventional alliance with an unscrupulous band of misfits. Set almost four thousand years BBY, the series is set during the Mandalorian Wars, which serves as the catalyst event leading into the KOTOR video game. Knights of the Old Republic ran for fifty issues and was one of Dark Horse’s best selling comics series. 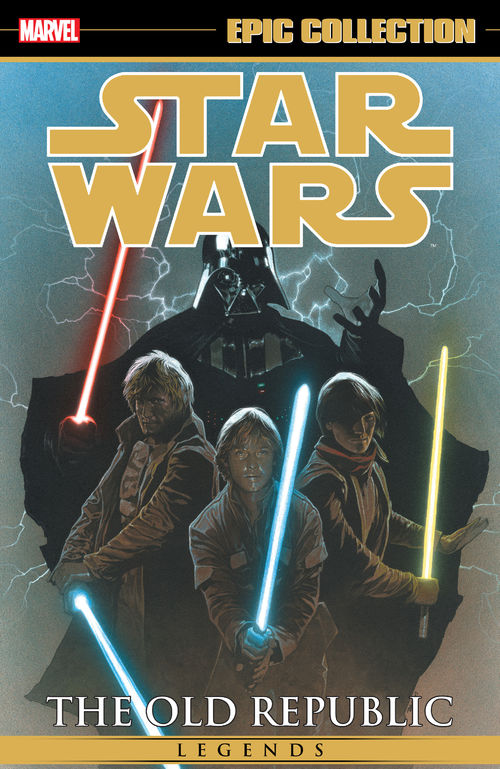 John Jackson Miller continues his massive, bestselling series that follows the misadventures of Zayne Carrick, a Padawan of the Old Republic who was framed for the murder of his fellow students by his master. The Jedi Covenant, comprised of rogue Jedi Consulars obsessed with preventing the return of the Sith, pursue Zayne and his friends Gryph, Jarael, and Camper from one corner of the galaxy to the other. All of this is set in the context of the Mandalorian Wars, the precursor to the events of 2003’s Game of the Year, Knights of the Republic, from BioWare and writer Drew Karpyshyn. 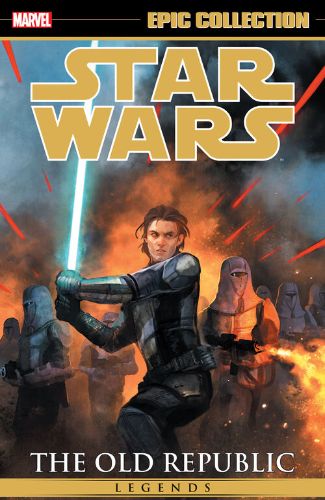 This is the explosive and epic finale to John Jackson Miller's series that following the misadventures of the horrible failure of a Padawan, Zayne Carrick, who was framed for the murder of his fellow students by his master. The rogue Jedi Consulars called the Jedi Covenant, obsessed with preventing the return of the Sith, pursue Zayne and his friends Gryph, Jarael, and Camper from one corner of the galaxy to the other. All of this is set in the context of the Mandalorian Wars, at once a sequel to the 90s Tales of the Jedi series and a prequel to the massively popular video game, Knights of the Old Republic.