Get Started
Jaxxon
A Youtini Collection

Star Wars books you should read if you like
Jaxxon

This is some text inside of a div block.
Jaxxon

“I love that green rabbit.” - Cavan Scott in an interview with The Living Force

nly the strongest, most legendary of characters had a hope of bridging the space between Canon and Legends. Grand Admiral Thrawn, for example. More recently, Durge from Tartakovsky’s Clone Wars survived the purge and made his Canon debut in Marvel’s War of the Bounty Hunters.

Ultimately, it takes tremendous staying power for a character to make such a comeback. And a creator who truly believes. Such is the case with Jaxxon the rabbit Lepi.

Perhaps the most memorable and yet divisive original character in the original Marvel Star Wars comics, Jaxxon made his debut in issue #8, “Eight for Aduba-3,” a comical tribute to Kirosawa’s Seven Samurai.

Originally conceived of by Roy Thomas and Howard Chaykin, the creation of the pilot of the Rabbit’s Foot was one of the very first original Expanded Universe characters to originate outside of the films themselves! Perhaps he was too similar to a certain wascally wabbit of Warner Brothers’ fame.

Even his homeworld, Coachelle Prime, is a nod to a 1953 Buggs Bunny story!  But for much of the Expanded Universe’s history, Jaxxon was simply the stuff of legends.

He never reappeared in Legends continuity after 1994, and even then his last Legends appearance was in an article in Gamer Magazine. But that was far from the end of the story for our lovable, long-eared Lepi.

When Star Wars comics made their return to Marvel at long last in 2015, Jaxxon received a head-nod in the form of not one but two variant covers for Star Wars #1 from artists John Tyler Christopher and Phil Noto, what seemed like certainly nothing more than Easter Eggs at the time. . . or were they?

The wannabe scoundrel even made his journey from a joke to the three-dimensional world, receiving his own Hasbro Black Series action figure, coming soon to the shelves near you!

But he didn’t get shelvable status all on his own—far from it, in fact. Star Wars Adventures writer Cavan Scott (lauded winner of  Youtini’s Social Butterfly award in 2020) started spotlighting the smuggler in 2018, starting with Star Wars Adventures Annual’s backup story! “The Lost Eggs of Livorno” at first appeared to be a joke—with Lucasfilm Publishing’s Creative Director debuting the news on April Fool’s Day!

With Jaxxon, the legend looms large; perhaps even derided by George Lucas himself.

From his original reintegration into Canon with the Adventures Annual, the IDW annual has become since made it a yearly tradition to feature a Jaxxon tale—“The Lost Eggs of Livorno” was followed by “Hare Brained Heist” in 2019 and “Rabbit Hunt” in 2020.

In true Easter fashion, Jaxxon made his return to the land of the living in an animated short as part of an episode of Jedi Temple Challenge, even though his corpse can be seen in the aftermath of a crashed cruiser in the 2012 The Clone Wars episode "A Sunny Day in the Void.”

With Jaxxon, one thing’s for sure: although his past is dicey, his future looms large! Recently receiving his most substantial story yet, with Cavan’s Scott’s story, “Fake it Till You Make It,” in From a Certain Point of View: The Empire Strikes Back.

Scott has gone on record with our very own podcast, The Living Force, in saying that with Jaxxon, the metanarrative is part of the appeal—he’s a beacon of the unlovable, neglected characters struggling to find their place in the galaxy.

What’s next, you might ask? While he says Jaxxon is about 200+ years too young  to appear in the High Republic, Scott says he’d love to write “Old Man Jaxxon,” in which a crusty, weathered friend of Lando’s helps out Rey, Poe, and Finn. We agree! In the meantime, here’s an eclectic assortment of Jaxxon-centric stories to tide you over, starting all the way back in 1977. 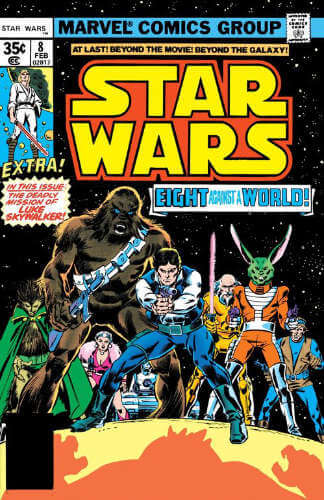 Written by
Roy Thomas, Howard Chaykin
Artwork by
Howard Chaykin
Part of the
Marvel Comics Star Wars (1977) Series
#
in the Youtini Reading Order
A colorful riff on Kirosawa’s Seven Samurai, one of the first original stories in the Expanded Universe pits Han and Chewie with the ever-divisive Jaxxon and his crew of Cloud Riders in an effort to defend a moisture farm from a band of raiders.
#
in the Youtini Reading Order 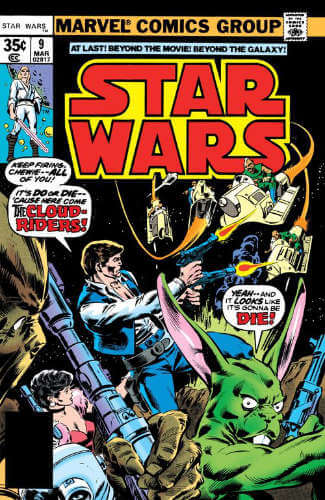 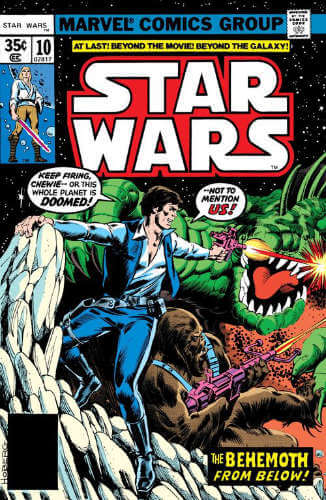 Written by
Donald F. Glut, Howard Chaykin, Roy Thomas
Artwork by
Howard Chaykin, Tom Palmer, Alan Kupperberg
Part of the
Marvel Comics Star Wars (1977) Series
#
in the Youtini Reading Order
This is the final entry in the Aduba-3 story arc, which began in issue eight. It’s got Jaxxon the space rabbit, a massive monster, a shaman, and even a wannabe Jedi!
#
in the Youtini Reading Order 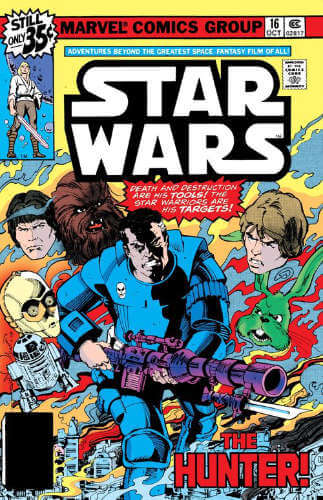 Written by
Archie Goodwin
Artwork by
Walt Simonson
Part of the
Marvel Comics Star Wars (1977) Series
#
in the Youtini Reading Order
Issue 16 has aged in an incredibly interesting way, far beyond the scope of its original creators. It introduce Bielert Valance, the bounty hunter who has since been recanonized and headlines Marvel’s Bounty Hunters, Target Vader, and War of the Bounty Hunters series. Not only that, but his initial appearance features a battle against another Legendary character—Jaxxon!
#
in the Youtini Reading Order 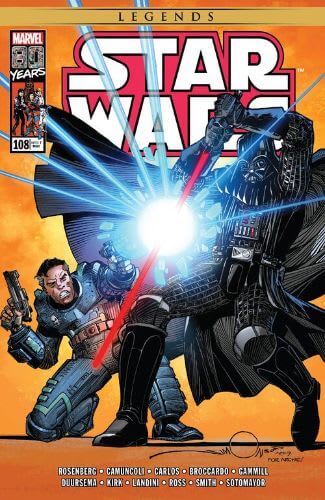 Written by
Matthew Rosenberg
Artwork by
Giuseppe Camuncoli, Andrea Broccardo, Kerry Gammill, Ze Carlos, Jan Duursema, Stefano Landini, Luke Ross, Leonard Kirk
Part of the
Marvel Comics Star Wars (1977) Series
#
in the Youtini Reading Order
In a rare exception to recent publication trends, Marvel’s original Legends comics run received one final issue decades after its original run ended. Not only that, but issue 108 is in fact a sequel to issue 50, not 107! Gotta love Star Wars, right? The victory lap of an issue continues the story of the bounty hunter, Valance, who finally faces off against Darth Vader and prepares the soil for his reintroduction into Canon.
#
in the Youtini Reading Order 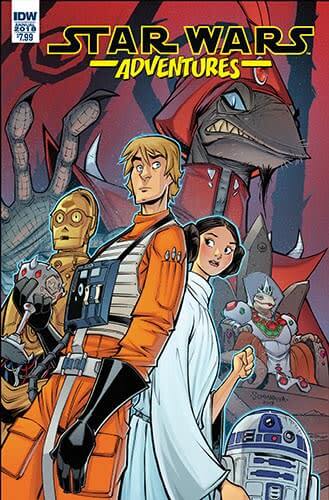 Written by
John Jackson Miller, Cavan Scott
Artwork by
Jon Sommariva, Alain Mauricet, Tom B. Long, Matt Herms, Chris Fenoglio, Jon Sommariva
Part of the
IDW Star Wars Adventures (2017) Series
#
in the Youtini Reading Order
This issue of IDW’s ongoing Star Wars comic aimed at young readers features two separate stories. One, “Mind Your Manners,” is Kenobi author John Jackson Miller’s only story for IDW to date, where Luke and Leia are on a diplomatic mission but quickly end up on quite the adventure! Cavan Scott wrote the other, “The Lost Eggs of Livorno.” These stories can be found in the fourth volume of the Star Wars Adventures trade paperbacks, Smuggler’s Blues.
#
in the Youtini Reading Order 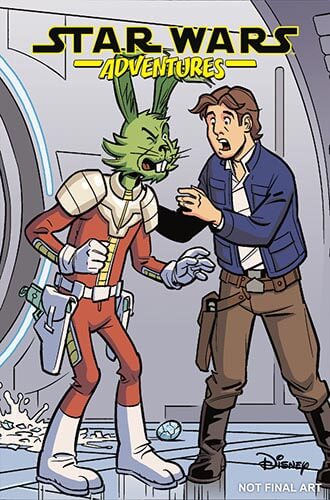 Written by
Cavan Scott
Artwork by
Alain Mauricet, Stan Sakai
Part of the
IDW Star Wars Adventures (2017) Series
#
in the Youtini Reading Order
Following in the trend established in the 2018 annual, Cavan Scott returns to tell another tale of Jaxxon the old-school space rabbit. He’s paired up with Lando Calrissian, whose style serves in stark contrast to Jaxxon’s absurdity. And yet somehow the duo just works! Also featuring a backup story, “So Much More,” about Leia’s heritage.
#
in the Youtini Reading Order 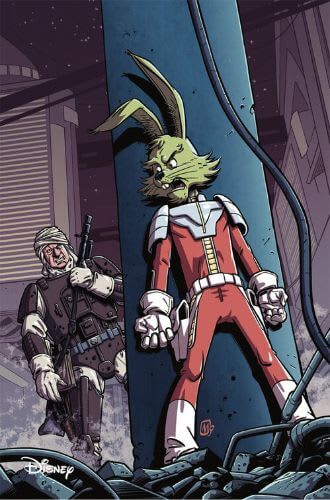 Written by
Cavan Scott, Nick Brokenshire
Artwork by
Nick Brokenshire, Franchesco Gaston
Part of the
IDW Star Wars: Adventures (2020) Comic Series
#
in the Youtini Reading Order
The third entry in Jaxxon-centric stories in the IDW Adventure annuals, the 2020 annual spins a tall tale of the buffoonish smuggler on the run from Dengar and IG-88!
#
in the Youtini Reading Order