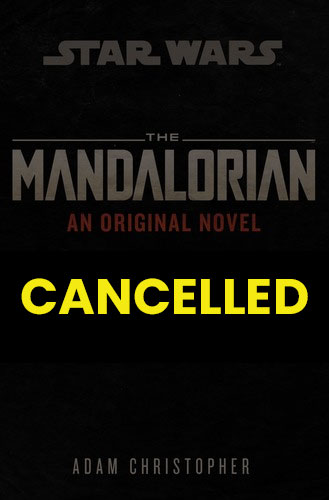 By
Adam Christopher
Released
Nov 2, 2021
Artwork by
Narrated by
Takes place in
9 ABY
In the
New Republic
era
Part of the
Collects
Community Rating
#
in the
Youtini Reading Order

Publisher's SummaryBooks in this SeriesYoutini ReviewVideo ReviewStaff ReviewsCommunity ReviewsVideosCollections
This recently announced title promises to follow our favorite characters from The Mandalorian in the first ever Canon novel based on the heralded series. Del Rey confirmed that it is not a novelization, but an all-new story. The possibilities are endless. This is Adam Christopher's first full-length Star Wars novel, having previously written "End of Watch" in From a Certain Point of View.

The Mandalorian: An Original Novel was a planned canon novel to be written by Adam Christopher and published by Del Rey, based on the 2019 television series The Mandalorian.[2] Announced on June 30, 2020, as part of The Mandalorian's publishing program,[3] it was originally scheduled for release on December 1 of that year,[4] before being delayed to November 2, 2021.[1] The novel was cancelled by Del Rey on March 9, 2021, but the publisher stated that they were already working on a new novel with Christopher.