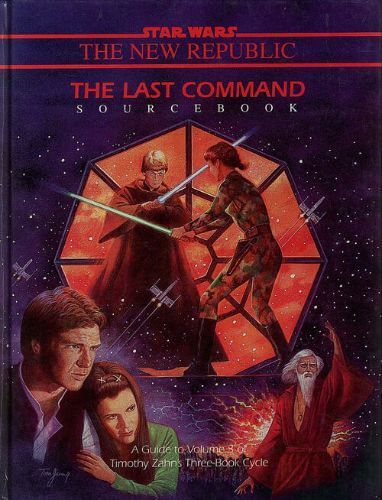 The Last Command Sourcebook is a hardcover supplement to Star Wars: The Roleplaying Game published by West End Games. It was written by Eric Trautmann and first published in March 1994. The material covered includes characters, locations, starships and much more that appeared in the final volume of Timothy Zahn's series. Finally! The stunning conclusion to Timothy Zahn's three-book cycle is adapted for Star Wars: The Roleplaying Game. The New Republic faces a grave challenge from a reunited Empire, as the infamous Imperial Grand Admiral Thrawn takes the battle to Coruscant, the very heart of the New Republic! As Thrawn plans his final stunning campaign, the New Republic's bravest heroes race across Wayland in a desperate attempt to destroy the Emperor's cloning chambers at Mount Tantiss! Learn the story-behind-the-story of this climactic showdown between the Republic and the evil Galactic Empire. Return to the wonder and excitement of a far-off galaxy in this companion volume to Timothy Zahn's best-selling novel The Last Command. This book includes complete information and game statistics on all of the characters, aliens, vehicles, droids, planets and starships from this gripping adventure.