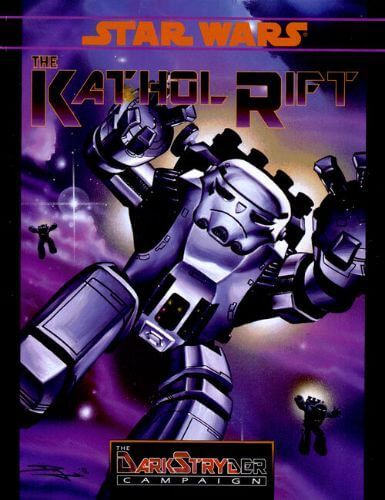 The Kathol Rift is a supplement to Star Wars: The Roleplaying Game published by West End Games. It is the third book in the four-part series The DarkStryder Campaign and was published in May 1996. This adventure is set in 8 ABY. The complete campaign is formed by: The DarkStryder Campaign The Kathol Outback The Kathol Rift Endgame The crew of the FarStar returns in the second supplement for the DarkStryder Campaign! The New Republic vessel FarStar has relentlessly pursued rogue Imperial Moff Sarn through the uncharted reaches of the Kathol Outback and has arrived at the mysterious Kathol Rift, an ancient region of space with a dark, terrible history. The Rift - a monstrous cloud of charged particles, radioactive storms and energy discharges - is a navigator's nightmare. Stories abound about the effect the Rift has on sane beings, stories of madness, despair and terror. Superstitious spaces avoid this segment of space as if it were cursed, telling of terrifying hallucinations, random navigational anomalies and other inexplicable phenomena. But somewhere inside this "seething cauldron of galactic power" lie the clues that will ultimately lead the New Republic crew to its final showdown with Sarne and his mysterious benefactor ... DarkStryder. The Kathol Rift features source material on this fearsome region of space, tips on integrating new sub-plots into the multi-character DarkStryder Campaign, and six new adventures that lead the New Republic crew closer to their final battle with the forces of the Empire.