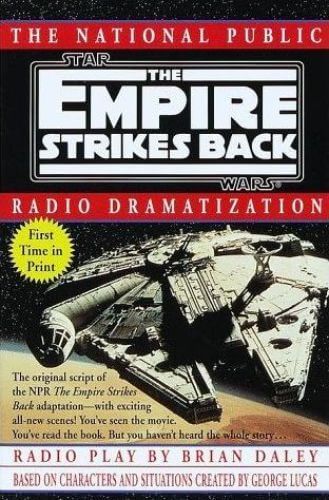 The Empire Strikes Back: The National Public Radio Dramatization

By
Brian Daley
Released
May 23, 1995
Artwork by
Narrated by
Takes place in
3 ABY
In the
Rebellion
era
Part of the
Collects
Community Rating
#
in the
Youtini Reading Order

The Empire Strikes Back: The National Public Radio Dramatization contains the original, unabridged script of the radio adaptation of Star Wars: Episode V The Empire Strikes Back. It also includes an introduction written by Brian Daley, which recounts the production of the radio play. The Empire Strikes Back movie followed the Rebel Alliance and the Empire through a struggle that crossed the galaxy, but the NPR dramatization will reveal scenes the movie never showed you… The Imperials discover the planetary probe evidence that leads them to the Rebel base. Luke Skywalker and Han Solo await rescue in an emergency shelter on the frozen surface of Hoth. Han Solo and his first mate, Chewbacca, fix the Falcon—and demolish each other's egos. Luke encounters a medical droid that could match See-Threepio for politesse anytime. The Rebel control room on Hoth during the rescue of Han and Luke and the desperate battle against the Imperial walkers. Luke's last-minute rendezvous with his X-wing squadron during the Battle of Hoth—on foot… Inside Yoda's cave on Luke's first morning of training in the mysterious ways of the Jedi. The ten episodes of this original radio dramatization script contain exciting new scenes and extra information on the events of the second installment in the acclaimed Star Wars series, which has become part of our modern mythology. And behind-the-scenes details come to light in an informative introduction by the script's author, Brian Daley—who wrote the episodes, reworked scenes on the spot in the recording studio, creating the National Public Radio dramatization broadcast on stations nationwide.