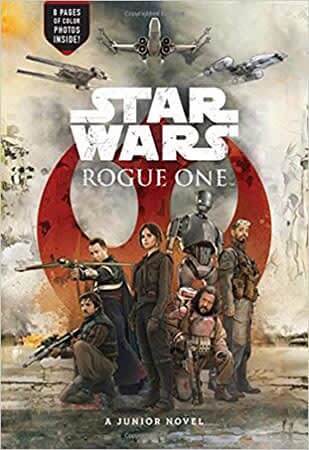 By
Matt Forbeck
Released
Mar 28, 2017
Artwork by
Narrated by
January LaVoy
Takes place in
0 BBY
In the
Age of Rebellion
era
Part of the
Collects
Community Rating
#
in the
Youtini Reading Order

Publisher's SummaryBooks in this SeriesYoutini ReviewVideo ReviewStaff ReviewsCommunity ReviewsVideosCollections
“Rebellions are built on hope.” Just one line from Rogue One’s film and novelization stands out as a quote that has come to represent what Star Wars has always been about: Finding hope when there doesn’t seem to be any. There are a handful of books published surrounding Rogue One -- a young adult story, several adult novels, and of course, a version of the story for younger audiences to enjoy. This novel, written for young Star Wars fans who want more from their favorite movies, tells the story of Jyn Erso and her efforts to take down the evil Empire ruling the galaxy by force.

Relive the excitement of Rogue One: A Star Wars Story with this action-packed retelling!

The Rebel Alliance has learned of the existence of a terrifying Imperial weapon, capable of destroying entire planets: the Death Star. The fate of the galaxy rests on the courageous young woman Jyn Erso and her band of unlikely companions as they race to steal the plans to the Death Star before time runs out.