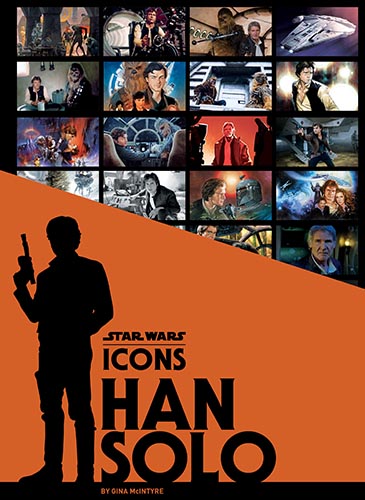 By
Gina McIntyre
Artwork by

Discover the incredible story behind the creation and legacy of one of Star Wars’ most beloved characters with Star Wars Icons: Han Solo. Smuggler. Rogue. Hero of the Rebellion. Scruffy-looking nerf herder. Han Solo has been called all these things and more since making his debut in the original Star Wars film back in 1977. Four decades later, the irrepressible Solo continues to be one of the most iconic and enduring elements of the saga. Star Wars Icons: Han Solo covers the character’s entire journey, from his genesis in George Lucas’s first drafts of Star Wars to Harrison Ford’s iconic performances in the original three films and The Force Awakens, and the character’s rebirth in Solo: A Star Wars Story. The book also takes an in-depth look at Solo’s role in the Star Wars expanded universe, through novels, comics, video games, and more, and the indelible impression the character has made on pop culture. Illustrated with a treasure trove of rare and previously unseen imagery, including candid on-set photography and stunning concept art, this deluxe volume also features exclusive new interviews with Harrison Ford, Alden Ehrenreich, Mark Hamill, Billy Dee Williams, Peter Mayhew, Ron Howard, J. J. Abrams, Lawrence Kasdan, Jonathan Kasdan, and many more key creatives. Comprehensive and revelatory, this is the definitive book for Han Solo fans across the galaxy.