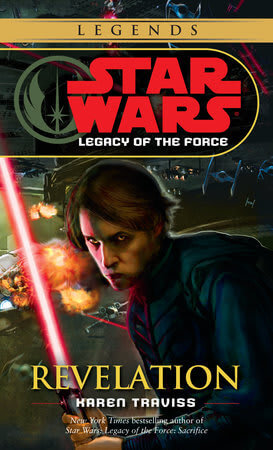 By
Karen Traviss
Released
Feb 26, 2008
Artwork by
Narrated by
Marc Thompson
Takes place in
41 ABY
In the
Legacy
era
Part of the
Legacy of the Force Series
Collects
Very Good
8.3
8.3
8.3
Community Rating
#
114
in the
Youtini Reading Order

Publisher's SummaryBooks in this SeriesYoutini ReviewVideo ReviewStaff ReviewsCommunity ReviewsVideosCollections
Legacy of the Force continues in this entry from the infamous Legends author Karen Traviss. And it wouldn't be a Traviss book if it didn't have Mandalorians! Jaina Solo trains under Boba Fett himself to learn the skills it will take to defeat Darth Caedus.

During this savage civil war, all efforts to end Jacen Solo’s tyranny of the Galactic Alliance have failed. Now, with Jacen approaching the height of his dark powers, no one–not even the Solos and the Skywalkers–knows if anything can stop the Sith Lord before his plan to save the galaxy ends up destroying it.

Jacen Solo’s shadow of influence has threatened many, especially those closest to him. Jaina Solo is determined to bring her brother in, but in order to track him down, she must first learn unfamiliar skills from a man she finds ruthless, repellent, and dangerous. Meanwhile, Ben Skywalker, still haunted by suspicions that Jacen killed his mother, Mara, decides he must know the truth, even if it costs him his life. And as Luke Skywalker contemplates once unthinkable strategies to dethrone his nephew, the hour of reckoning for those on both sides draws near. The galaxy becomes a battlefield where all must face their true nature and darkest secrets, and live–or die–with the consequences.