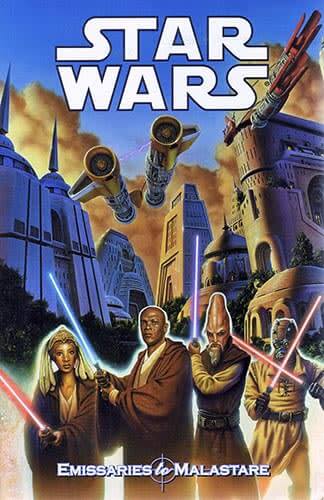 By
Timothy Truman
Released
Sep 5, 2001
Artwork by
Various
Narrated by
Takes place in
32 BBY
In the
Rise of the Sith
era
Part of the
Dark Horse Comics Republic Series
Collects
Republic: #13-18
Community Rating
#
in the
Youtini Reading Order

Publisher's SummaryBooks in this SeriesYoutini ReviewVideo ReviewStaff ReviewsCommunity ReviewsVideosCollections
Set in between Episodes I and II, this story arc of the Republic comics sees key members of the Jedi Council such as Ki-Adi-Mundi, Mace Windu, and Adi Gallia to the Podracing planet of Malastare to assist in negotiating a treaty between the Lanniks and the Gran. Little do they know that they are being hunted themselves! Tusken Raider Jedi Padawan A’Sharad Hett befriends Anakin Skywalker, Sebulba makes a comeback, and the Jedi journey to Nar Shadaa. The story serves as an early backstory for Mace Windu. Plus he fights Rancors!

When half of the Jedi High Council journeys to the foreign world of Malastare to negotiate a peace treaty between two warring factions, an insidious third party is waiting in the wings to destroy the Jedi.