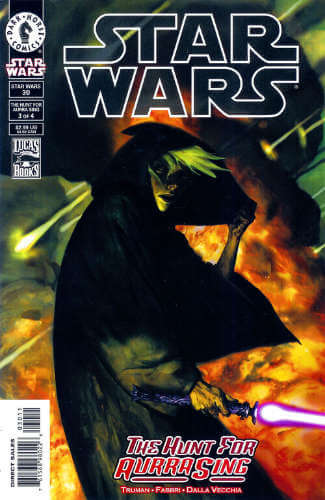 By
Timothy Truman
Released
May 30, 2001
Artwork by
Davide Fabbri
Narrated by
Takes place in
30 BBY
In the
Rise of the Sith
era
Part of the
Dark Horse Comics Republic Series
Collects
Community Rating
#
in the
Youtini Reading Order

The Hunt for Aurra Sing, Part 3 is the thirtieth issue in the Star Wars: Republic series of comics. It was published on May 30, 2001 by Dark Horse Comics. Aurra Sing tracks her current target and former mentor, the Dark Woman, to a lush jungle world which is being bombarded by a seasonal meteor shower. On this beautiful yet dangerous planet, the Dark Woman seeks respite from the rigors of Jedi life and peace from her past, but her past failure has now been paid to hunt and kill her! Converging onto the same planet, Adi Gallia, Ki-Adi-Mundi, and A'Sharad Hett accompany a suspicious Quarren expedition from Mon Calamari to the surface, questioning the Quarren senator's motives and prepared to uncover the hidden reason behind his expedition! "The Hunt for Aurra Sing" continues in this exciting third chapter!