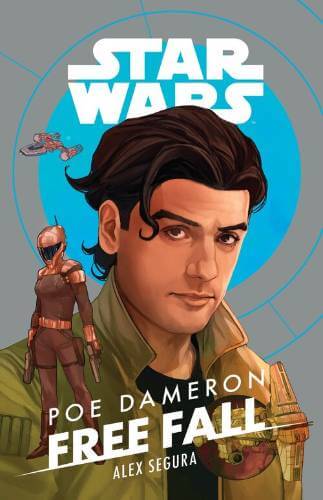 By
Alex Segura
Released
Aug 4, 2020
Artwork by
Narrated by
Sean Elias-Reyes
Takes place in
18 ABY
In the
New Republic
era
Part of the
Stand Alone Novels
Collects
Good
7.8
7.8
7.8
Poe Dameron: Free Fall is a fast paced character study of one of the best characters in the Sequel Trilogy and a marvelous introduction of first time Star Wars writer, Alex Segura
Community Rating
#
128
in the
Youtini Reading Order

Publisher's SummaryBooks in this SeriesYoutini ReviewVideo ReviewStaff ReviewsCommunity ReviewsVideosCollections
In “Poe Dameron: Free Fall,” Alex Segura delivers not only the origin story for the galaxy’s most daring and charismatic pilot since Han Solo, but also more back story than we dared hope to discover about the mysterious and enigmatic Zorii Bliss. Taking a new spin on the familiar Star Wars trope of a young man on a backwater planet searching for something more, Segura carves a clear arc from the son of Rebel Alliance war heroes to “the best pilot in the Resistance” – and he doesn’t leave out the whole “spice running” bit we hear about in “The Rise of Skywalker.” It’s a fast-paced and fun adventure that sets up not only the Poe Dameron we see on screen, but the ace we find in Charles Soule’s comic series – along with a couple does of Babu Frick for good measure.

Learn more about the dashing hero from the new Star Wars films! Telling a story hinted at in The Rise of Skywalker… It's been a few years since Poe's mother passed away, and Poe and his father, who was a pilot for the Rebellion, have had more and more trouble connecting. Not sure what he wants to do with his life, teenage Poe runs away from home to find adventure, and to figure out what kind of man he is meant to be.

Karl Sander
Staff Writer
In Poe Dameron: Free Fall, Alex Segura shines a light on a part of the charismatic Resistance pilot’s life we only get our first hints of in The Rise of Skywalker. A character with a shady past becoming a hero for the good guys isn’t new territory in the franchise (a certain other charismatic pilot had done the same thing a generation earlier, after all). But some were taken slightly aback by the film’s revelation that Dameron had spent time in the galaxy’s criminal underworld and had a hard time squaring that with the character they already knew. But in revisiting a trope we know well in Star Wars, that of a frustrated young man eager for adventure, Segura draws a clear arc through Poe’s development. From a restless adolescent, through a not-quite-convinced member of a criminal enterprise, to a young man who finds his true calling, we find out how Poe got from the frigid Thieves’ Quarter of Kijimi to his place as one of the leaders of the Resistance. The author does a beautiful job of capturing Oscar Isaac’s portrayal of the character, nicely sets up things we see in the films, and provides just as much – if not more – backstory about the Kerri Russel’s enigmatic Zorii Bliss.

Emma Parke
Video Host & Producer
It was surprising to say the least that Poe Dameron, the great man and loyal soldier of the New Republic, used to have a life as a spice runner. When this information was revealed to us in The Rise of Skywalker, along with the introduction of Zorii Bliss, I immediately looked forward to getting their backstories in any form at some point. That being said, this book has done the job of establishing Poe's backstory perfectly. This book is, in actuality, a coming of age story masked as a typical Star Wars adventure. There's something for everyone in this book: action, romance, criminal scheming, and even a little mystery. There are some great twists in the story that pays off in a major way at the end. Zorii Bliss is such an intriguing character, and I'm glad we got more of her backstory. And did I mention that this book has Babu Frik in it? That'd be enough to sell me in the first place. Overall, this was a well-written book that focuses heavily on character development. My only criticism would be that there are some small time jumps that feel abrupt, but otherwise, this is an incredible book. This novel was extremely fun to read, and I enjoyed getting to know Zorii after meeting her briefly in The Rise of Skywalker. Plus, getting more stories with Poe is always a great thing. I highly recommend this book to any fan of Star Wars.

Eric Eilersen
President
Poe Dameron: Free Fall is a fast paced character study of one of the best characters in the Sequel Trilogy and a marvelous introduction of first time Star Wars writer, Alex Segura. Much like Rae Carson's Most Wanted, Free Fall almost features two protagonists in Poe Dameron and the mysterious fan-favorite Zorii Bliss. The resulting adventure combines breakneck piloting, thrilling spice running, and heartfelt emotional beats that create a beautifully entertaining ride. Regardless of your like or dislike of The Rise of Skywalker, Poe Dameron: Free Fall is a must read for anyone who wants to jump into the cockpit of the nearest X-Wing and...well...blow something up.
See More