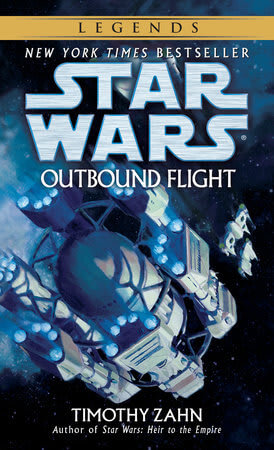 By
Timothy Zahn
Released
Jan 31, 2006
Artwork by
Narrated by
Jonathan Davis
Takes place in
27 BBY
In the
Rise of the Sith
era
Part of the
Legends Stand Alone Novels
Collects
Very Good
8.0
8.0
8.0
Community Rating
#
40
in the
Youtini Reading Order

Publisher's SummaryBooks in this SeriesYoutini ReviewVideo ReviewStaff ReviewsCommunity ReviewsVideosCollections
The Outbound Flight Project—Jedi Master Jorus C’baoth’s plan to discover new planets and species in the Unknown Regions—has been approved. However, Darth Sidious knows that the project could lead to the downfall of the entire Republic if the ship carrying C’baoth and his followers happens across a mysterious threat he has long sensed in the far reaches of space. When Sidious’ operatives discover Thrawn and the Chiss Ascendency directly in the ship’s path, a deal must be struck to stop C’baoth at any cost. Zahn delivers another powerful chapter of Thrawn’s story in this novel that depicts one of his earliest confrontations with the Republic. Not only does it flesh out details of the Chiss Ascendency, but it also sets the stage for the eventual arrival of what lurks in the Unknown Regions.

It began as the ultimate voyage of discovery–only to become the stuff of lost Republic legend . . . and a dark chapter in Jedi history. Now, at last, acclaimed author Timothy Zahn returns to tell the whole extraordinary story of the remarkable–and doomed–Outbound Flight Project.

The Clone Wars have yet to erupt when Jedi Master Jorus C’baoth petitions the Senate for support of a singularly ambitious undertaking. Six Jedi Masters, twelve Jedi Knights, and fifty thousand men, women, and children will embark–aboard a gargantuan vessel, equipped for years of travel–on a mission to contact intelligent life and colonize undiscovered worlds beyond the known galaxy. The government bureaucracy threatens to scuttle the expedition before it can even start–until Master C’baoth foils a murderous conspiracy plot, winning him the political capital he needs to set in motion the dream of Outbound Flight.

Or so it would seem. For unknown to the famed Jedi Master, the successful launch of the mission is secretly being orchestrated by an unlikely ally: the evil Sith Lord, Darth Sidious, who has his own reasons for wanting Outbound Flight to move forward . . . and, ultimately, to fail.

Yet Darth Sidious is not the mission’s most dangerous challenge. Once underway, the starship crosses paths at the edge of Unknown Space with the forces of the alien Chiss Ascendancy and the brilliant mastermind best known as “Thrawn.” Even Jedi Knight Obi-Wan Kenobi, aboard Outbound Flight with his young Padawan student, Anakin Skywalker, cannot help avert disaster. Thus what begins as a peaceful Jedi mission is violently transformed into an all-out war for survival against staggering odds–and the most diabolical of adversaries.

Meg Dowell
Editor-in-Chief
This book has a little bit of everything: Clone Wars-era drama, Chiss brutality, and that legendary Timothy Zahn touch. The Clone Wars has always been one of my favorite eras in the Star Wars timeline, and I actually didn't know when this story took place when I picked it up to read. I was pleasantly surprised to encounter both Thrawn and some of my favorite Jedi. A fast-paced, action-packed, politically driven story perfect for anyone looking for some legends content that takes place before Attack of the Clones.