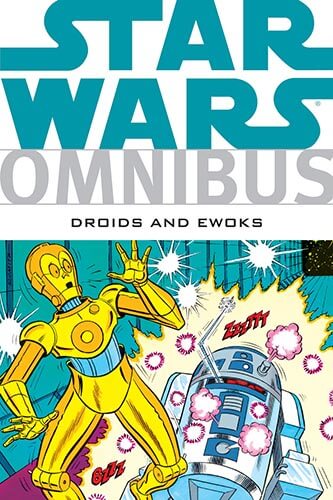 By
Various Authors
Released
Jun 12, 2012
Artwork by
Various
Narrated by
Takes place in
15 BBY - 3 ABY
In the
Reign of the Empire
era
Part of the
Dark Horse Omnibus Series
Collects
*see book profile for details
Community Rating
#
in the
Youtini Reading Order

Based on the children’s television cartoon series of the same names, Ewoks and Droids explores further adventures in the lives of the Ewoks on Endor and the droids R2-D2 and C-3PO. The Ewoks become embroiled in the dangers of their planet—lizard warriors, underwater kingdoms, magic spells—and the outside world—pirates, invaders, and more! The droids encounter more than one new master, war droids, megaweapons, time travel, and even Ewoks! This omnibus collects all the issues of the Ewoks and Star Wars: Droids comics series, released in the 1980s by Marvel’s imprint Star Comics.