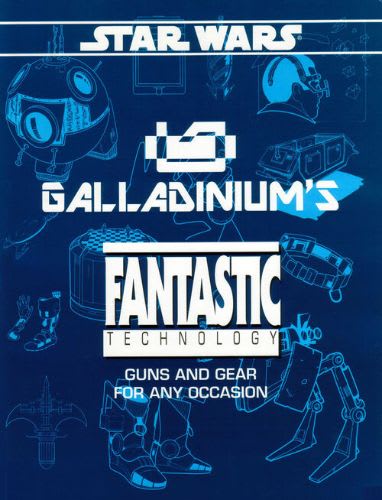 By
Rick D. Stuart and many others
Released
Apr 1, 1995
Artwork by
Various
Narrated by
Takes place in
In the
era
Part of the
West End Games Roleplaying Game
Collects
Community Rating
#
in the
Youtini Reading Order

Galladinium's Fantastic Technology is a roleplaying supplement published by West End Games for Star Wars: The Roleplaying Game. It was written by Rick D. Stuart and first published in 1995. It includes several item articles that were submitted by players to The Fantastic Technology Contest, a competition sponsored by the Role Playing Game Association. The book is a guide to a wide array of "guns and gear for any occasion" for use by characters in the roleplaying game, featuring mainly exotic equipment. It maintains the in-universe conceit that it is, in fact, the 50th anniversary issue of Galladinium's Galactic Datalog of Fantastic Technology, a catalog purveying fine merchandise to an upscale clientele. A catalog of equipment for adventures... From an Abyssin grafting patch to the Verpine shatter gun, this catalog contains essential adventuring gear for rough-and-tumble encounters. With sections detailing weapons, micro-electronics, survival gear, droids and medical supplies, Galladinium's catalog of wares will prove to be indispensable to any group of characters!