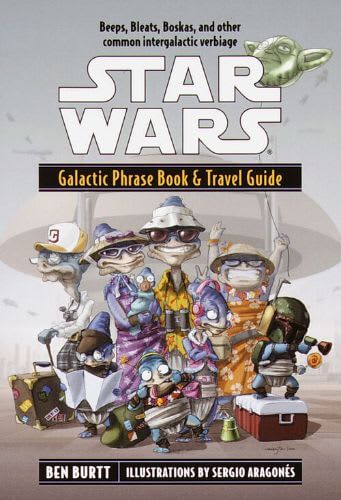 By
Ben Burtt
Released
Aug 7, 2001
Artwork by
Warren Fu & Sergio Aragonés
Narrated by
Takes place in
6 ABY
In the
New Republic
era
Part of the
Collects
Community Rating
#
in the
Youtini Reading Order

The Galactic Phrase Book & Travel Guide is a Star Wars Legends reference book written by sound designer Ben Burtt and illustrated by Sergio Aragonés. Its first half is presented as an in-universe book written by Ebenn Q3 Baobab in 6 ABY, and the latter half covers the real-world sounds developed by Burtt. The book was published on August 7, 2001 by Del Rey. Whether doing business with the Hutts or trying to get a decent haircut on Coruscant, the Galactic Phrase Book & Travel Guide is an invaluable tool for galactic travelers. Vividly illustrated by Sergio Aragonés, this handy volume covers the basics, including Greetings—H'chu apenkee, o'grandio lust: "Greetings, glorious host" in Huttese. It doesn't hurt to be nice, and it might hurt you not to. Travel arrangements—Zat x'ratch keezo bompaz ha sheep: in Bocce, "That scratch was there when I rented the ship." Bargaining for your life—Huwaa muaa mumwa: "Can I buy you a drink?" in Wookiee-speak. Try it. It just might work. A MUST HAVE WHEN TRAVELLING WITHOUT YOUR PROTOCOL DROID! Bonus!—An exclusive "Behind the Sounds" look at the Star Wars movies from Academy Award–winning Ben Burtt.