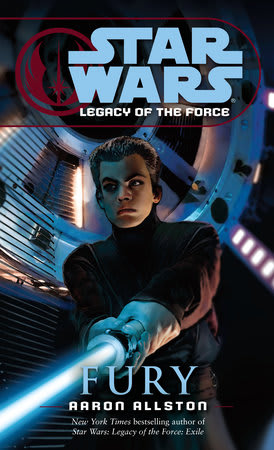 By
Aaron Allston
Released
Nov 27, 2007
Artwork by
Narrated by
Marc Thompson
Takes place in
40 ABY
In the
New Jedi Order
era
Part of the
Legacy of the Force Series
Collects
Very Good
8.2
8.2
8.2
Community Rating
#
109
in the
Youtini Reading Order

Publisher's SummaryBooks in this SeriesYoutini ReviewVideo ReviewStaff ReviewsCommunity ReviewsVideosCollections
Darth Caedus, formerly Jacen Solo, kidnaps his daughter, Allana, from Hapes, threatening her life if her mother Tenel Ka doesn’t pledge Hapes to the Galactic Alliance. Tenel Ka turns to the Jedi for help rather than caving in to Caedus’s pressure. Meanwhile, Han and Leia track down the ever elusive Dark Jedi Alema Rar. As Caedus continues his domination, he turns his sights on obtaining a super weapon: Centerpoint Station.

Fighting alongside the Corellian rebels, Han and Leia are locked in a war against their son Jacen, who grows more powerful and more dangerous with each passing day. Nothing can stop Jacen’s determination to bring peace with a glorious Galactic Alliance victory–whatever the price.

While Luke grieves the loss of his beloved wife and deals with his guilt over killing the wrong person in retaliation, Jaina, Jag, and Zekk hunt for the real assassin, unaware that the culprit commands Sith powers that can cloud their minds and misdirect their attacks–and even turn them back on themselves.

As Luke and Ben Skywalker struggle to find their place among the chaos, Jacen, shunned by friends and family, launches an invasion to rescue the only person still loyal to him. But with the battle raging on, and the galaxy growing more turbulent and riotous, there’s no question that it is Jacen who is most wanted: dead or alive.