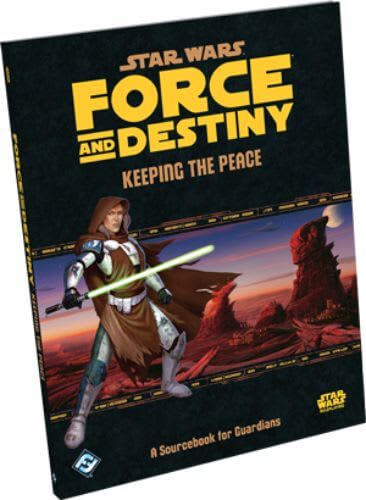 Force and Destiny: Keeping the Peace

Keeping the Peace is a sourcebook for Fantasy Flight Games' Star Wars: Force and Destiny roleplaying game Fight for justice with Keeping the Peace, a sourcebook for Guardian charactrers[sic] in the Star Wars®: Force and Destiny™ Roleplaying Game. In a galaxy ravaged by injustice and war, Guardians use the Force to make a positive difference in the lives of others, heal the galaxy's wounds, and establish peace wherever possible. This career supplement offers Guardian characters incomparable tools and talents to use as they protect the downtodden, establish order, and even lead troops into war. Keeping the Peace introduces three new Guardian specializations – the Armorer, the Warden, and the Warleader – along with three playable species: the hotheaded Lanniks, horned Iktotchi, and mammoth Whiphids. Two Guardian Signature abilities are introduced, along with a new Force Power that enables Guardians to shield themselves and others from harmful attacks. Players will find a variety of new armor, weapons (including lighstsabers), and starships with which to outfit their characters, while Game Masters will find extensive suggestions on crafting heroic adventures and epic campaigns.