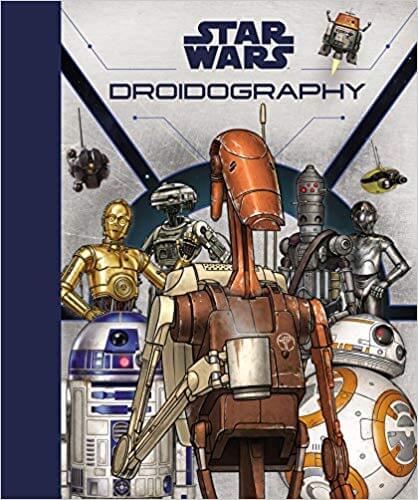 By
Marc Sumerak
Released
Nov 6, 2018
Artwork by
Narrated by
Takes place in
34 ABY
In the
New Republic
era
Part of the
Collects
Community Rating
#
in the
Youtini Reading Order

Publisher's SummaryBooks in this SeriesYoutini ReviewVideo ReviewStaff ReviewsCommunity ReviewsVideosCollections
This is a fun reference book aimed at the younger reader, so while it may not be as information and lore heavy as other reference books it is still a good overview of various droid types and famous droids from the Star Wars universe. It is also notable for the fact it is narrated by R0-GR from "LEGO Star Wars: The Freemaker Adventures" cartoon series, marking the first time and original LEGO Star Wars creation has made the jump to Canon.

Droidography is the ultimate in-universe guide to these lovable characters with insider info on their function and role in the Star Wars universe. Covering every known model of droid, including free-rolling astromechs, protocol units, KX-series security models, and even bounty hunter droids, the book is filled with fascinating facts and insights that show just how crucial droids are to every faction in the galaxy, from the Rebellion to the First Order. With thrilling original illustrations and amazing special features including lift-the-flaps, textures, and more, Star Wars: Droidography is guaranteed to thrill the saga’s legions of young fans.