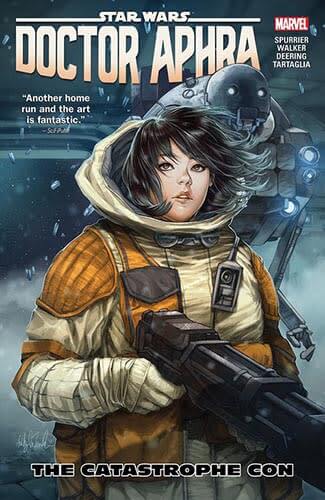 Rogue archaeologist Chelle Aphra is in hot water—an Imperial prison ship where she is close supervised at all times by guard droids. Despite her sketchy past, she might prove to be the Rebels' only hope. She teams up with a delightful crew consisting of a colorful and exesiential destroyer droid, a wimpy shapeshifter named Lopset, and ex-lovers Sana Starros and Imperial Inspector Tolvan. They’re on the run from Imperial authorities, a self-righteous lawman, the bloodthirsty droid Triple Zero, and even the psychotic ghost of a long-dead Jedi trapped in a fungus trapped in the hull of a crashed ship!

The characters of Doctor Aphra, Triple Zero, and BT-1 are first introduced in Kieron Gillen’s run on Darth Vader. When that series concluded, Aphra received her own solo series. This series is Si Spurrier’s run on these dark, twisted, and never boring characters.

Simon Spurrier takes the reins as rogue archaeologist Doctor Aphra jumps to light speed and accelerates into the next chapter of her life! Aphra is used to being in way over her head - but this time she's not alone! Who else is caught up in her latest misadventure? Let's hope they're friendly...otherwise Aphra may have finally bitten off more than she can chew!