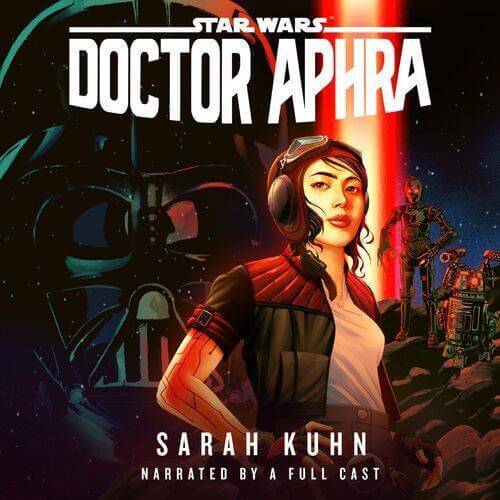 By
Sarah Kuhn
Released
Jul 21, 2020
Artwork by
Narrated by
A Full Cast
Takes place in
1 ABY
In the
Age of Rebellion
era
Part of the
Collects
Very Good
8.0
8.0
8.0
A fun, action-packed adventure that captures the heart and soul of one of our favorite scoundrels
Community Rating
#
42
in the
Youtini Reading Order

Publisher's SummaryBooks in this SeriesYoutini ReviewVideo ReviewStaff ReviewsCommunity ReviewsVideosCollections
Since her introduction in Kieron Gillen's Darth Vader series from Marvel in 2015, Doctor Aphra caught fire in the fandom. With a morally grey rogue archeologist accompanied by murderous droids, what's not to love? Her story is filled with twists and turns, betrayal and romance, with more skin-of-your-teeth escapes than you ever thought possible, and now you can experience her introduction in a whole new way. Sarah Kuhn's adaptation of Aphra's arc in the Darth Vader comics smartly tells the story from her perspective, somehow recapping the 2015 comics without ever feeling like you were retreading old ground. This is one of the more unique, fun, and diverse stories in the galaxy.

Doctor Aphra: An Audiobook Original. It will expand upon Doctor Chelli Aphra's introduction in Marvel Comics 2015 Star Wars: Darth Vader comic series. Dr. Chelli Lona Aphra, rogue archaeologist, is in trouble again. A pioneer in the field of criminal xenoarchaeology, Aphra recognizes no law, has no fear, and possesses no impulse control. To her, the true worth of the galactic relics she discovers isn't found in a museum but in an arsenal. This viewpoint has led to a lot of misunderstandings. After her latest plan goes horribly wrong, her roguish ways are on the verge of catching up to her, when suddenly Darth Vader, terror of the galaxy, swoops in with his lightsaber ignited and...saves her life? Don’t get her wrong - it's not like she's ungrateful. Sure, her new boss is a lord of the Sith. And okay, she may have just become a pawn in a deadly game being played by him and HIS boss, who happens to be the Galactic Emperor. And yes, the life expectancy of anyone who disappoints Vader can be measured in seconds. But she's back doing what she does best. She's got a ship to fly, a heist to pull, and two unorthodox but effective metal buddies: Triple-Zero, a protocol droid specializing in etiquette, customs, translation, and torture; and BT-1, an astromech loaded with enough firepower to take down a battlecruiser. Together, they might just find a way to get the job done and avoid the deadly performance review that waits at its conclusion. Just kidding. She's doomed.

Heather Goldman
Community Department Manager
My favorite part about the Doctor Aphra audio drama is that it puts a voice to the character that we’ve all grown to love in the Marvel comics. Even if you haven’t read any of the comic books, you can dive into this audiobook empty-handed because the story is a retelling of existing content. Some of the dialogue can get a bit repetitive at times, but it’s still worth checking out this wonderful piece of audio as you can blow through it in only five hours (and some change).

Andrew Bell
Video Department Coordinator
There really isn't much to say about this one other than, "Fun, fun, and a little more fun on top of that". This is a great introduction to Aphra for those who aren't already familiar with her character, but I think those who have been reading about her exploits in the comics will also get a lot out of it. Another solid audio entry, with hopefully many more to come.

Meg Dowell
Editor-in-Chief
Once I started listening, I found it nearly impossible to stop. The acting was flawless, and combined with the writing and high-quality production overall, this audio drama takes what Dooku: Jedi Lost accomplished and creates something even better. Aphra's story was a perfect one to bring to life in audio form - hopefully this is a trend that continues.
See More