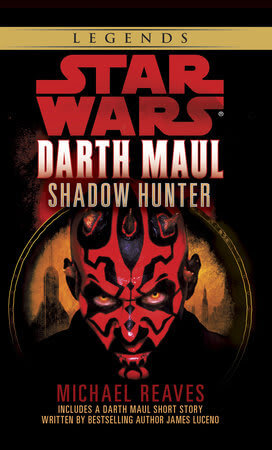 By
Michael Reaves
Released
Jan 30, 2001
Artwork by
Narrated by
Michael Cumpsty
Takes place in
32 BBY
In the
Rise of the Sith
era
Part of the
Legends Stand Alone Novels
Collects
Good
7.4
7.4
7.4
Community Rating
#
73
in the
Youtini Reading Order

For the infamous, power-hungry Sith, beholden to the dark side, the time has come to rise again.

After years of waiting in the shadows, Darth Sidious is taking the first step in his master plan to bring the Republic to its knees. Key to his scheme are the Neimoidians of the Trade Federation. Then one of his Neimoidian contacts disappears, and Sidious does not need his Force-honed instincts to suspect betrayal. He orders his apprentice, Darth Maul, to hunt the traitor down.

But he is too late. The secret has already passed into the hands of information broker Lorn Pavan, which places him right at the top of Darth Maul’s hit list. Then, in the labyrinthine alleyways and sewers of Coruscant, capital city of the Republic, Lorn crosses paths with Darsha Assant, a Jedi Padawan on a mission to earn her Knighthood. Now the future of the Republic depends on Darsha and Lorn. But how can an untried Jedi and an ordinary man, stranger to the powerful ways of the Force, hope to triumph over one of the deadliest killers in the galaxy?

Heather Goldman
Community Department Manager
Shadow Hunter is an excellent lead-up to The Phantom Menace as certain parts of the book seamlessly tie into the film. Most importantly, the novel effortlessly contributes to the character of Darth Maul in the way Michael Reaves depicts the Sith apprentice's reactions and adaptability to missions as well as his unconditional loyalty to Darth Sidious. Although the story heavily focuses on other characters like Lorn and Darsha, their purpose in this story is to show us Maul's intimidating relentlessness. If you're a big fan of Darth Maul, do not pass on Shadow Hunter.