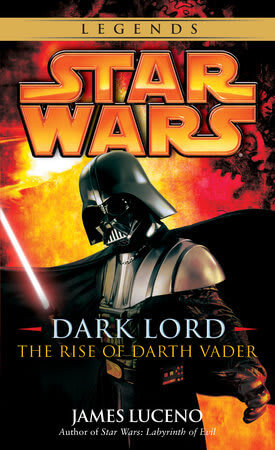 By
James Luceno
Released
Nov 22, 2005
Artwork by
Narrated by
Jonathan Davis
Takes place in
19 BBY
In the
Reign of the Empire
era
Part of the
Legends Stand Alone Novels
Collects
Good
7.5
7.5
7.5
Community Rating
#
34
in the
Youtini Reading Order

Publisher's SummaryBooks in this SeriesYoutini ReviewVideo ReviewStaff ReviewsCommunity ReviewsVideosCollections
A tie-in to the Star Wars: Dark Forces and Star Wars: Jedi Knight games, this novella kicks off a trilogy and features notable characters like Thrawn, Lando Calrissian, and Mon Mothma while providing an early EU example of the plot to steal the Death Star plans.

Throughout the galaxy, it was believed that Jedi Knight Anakin Skywalker–the Chosen One–had died on Coruscant during the siege of the Jedi Temple. And, to some extent, that was true. Anakin was dead.

From the site of Anakin Skywalker’s last stand–on the molten surface of the planet Mustafar, where he sought to destroy his friend and former master, Obi-Wan Kenobi–a fearsome specter in black has risen. Once the most powerful Knight ever known to the Jedi Order, he is now a disciple of the dark side, a lord of the dreaded Sith, and the avenging right hand of the galaxy’s ruthless new Emperor. Seduced, deranged, and destroyed by the machinations of the Dark Lord Sidious, Anakin Skywalker is dead . . . and Darth Vader lives.

Word of the events that created him–the Jedi Council’s failed mutiny against Supreme Chancellor Palpatine, the self-crowned Emperor’s retaliatory command to exterminate the Jedi Order, and Anakin’s massacre of his comrades and Masters in the Jedi Temple–has yet to reach all quarters. On the Outer Rim world of Murkhana, Jedi Masters Roan Shryne and Bol Chatak and Padawan Olee Starstone are leading a charge on a Separatist stronghold, unaware that the tide, red with Jedi blood, has turned suddenly against them.

When the three narrowly elude execution–and become the desperate prey in a hunt across space–it’s neither clone soldiers, nor the newly deployed stormtroopers, nor even the wrath of the power-hungry Emperor himself they must fear most. The deadliest threat rests in the hideously swift and lethal crimson lightsaber of Darth Vader–behind whose brooding mask lies a shattered heart, a poisoned soul, and a cunning, twisted mind hell-bent on vengeance.

For the handful of scattered Jedi, survival is imperative if the light side of the Force is to be protected and the galaxy somehow, someday reclaimed. Yet more important still is the well-being of the twin infants, Leia and Luke Skywalker, the children of Anakin and his doomed bride, Padmé Amidala. Separated after Padmé’s death, they must be made safe at all costs, lest the hope they represent for the future be turned to horror by the new Sith regime–and the unspeakable power of the dark side.

Jared Mayes
Legends Lookback Lead Host
Luceno knows how to deliver a well-rounded Star Wars novel. This is a compelling follow-up to Revenge of the Sith—even after being relegated to “Legends” status. Dark Lord: the Rise of Darth Vader is a good conclusion to the Darth Vader trilogy, a good insight into the defeat of the Jedi Order, and a little more meat to the conclusion to Revenge of the Sith. It feels like a significant step-down as opposed to Labyrinth of Evil and the ROTS novelization, but holds its own within the larger corpus of Star Wars literature.

Andrew Bell
Video Department Coordinator
A unique insight into a very different Vader than the one we're used to seeing. Picking up directly after the events of ROTS, we get to go inside the mask and experience the POV of Anakin-turned-Vader and all the struggles and challenges that came with it. This one was somewhat different than a typical Luceno book, as it was more straightforward and contained less subplot than his other works.