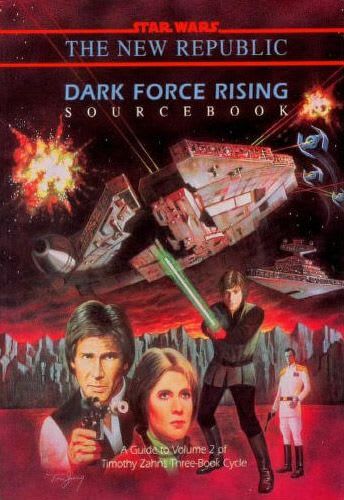 "It is believed that a Grand Admiral has returned to take control of the Imperial remnants. We believed that we had accounted for all of the Emperor's warlords, but what if we were wrong?" ―Voren Na'al[src] Dark Force Rising Sourcebook is a hardcover supplement to Star Wars: The Roleplaying Game published by West End Games. It was written by Bill Slavicsek and published in 1992. "I rule the Empire now. Not some long-dead Emperor..." Grand Admiral Thrawn's plan to restore the Empire to absolute power proceeds with horrifying efficiency. Only the bravery and skill of Princess Leia, Han Solo and Luke Skywalker can stop him from delivering a killing stroke to the New Republic! While Thrawn's schemes unfold, Luke Skywalker confronts the mad Dark Jedi, Joruus C'baoth, in a struggle for the fate of the Jedi Knights and the galaxy itself! Return to the wonder and excitement of a far-off galaxy in this companion volume to Timothy Zahn's best-selling novel Dark Force Rising. This book includes complete information and game statistics on all of the characters, aliens, vehicles, droids, planets and starships from this gripping adventure. "This is the calm before the storm..."