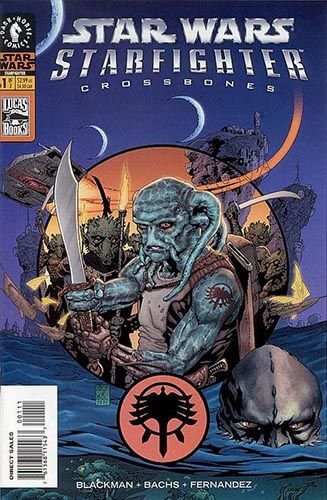 By
Haden Blackman
Released
Jan 9, 2002
Artwork by
Ramon Bachs
Narrated by
Takes place in
26 BBY
In the
Rise of the Sith
era
Part of the
Collects
Community Rating
#
in the
Youtini Reading Order

Publisher's SummaryBooks in this SeriesYoutini ReviewVideo ReviewStaff ReviewsCommunity ReviewsVideosCollections
Starfighter: Crossbones is a limited series spin-off of 2001’s Starfighter video game. Set eight years after the Battle of Naboo, pirate-turned-mercenary Nym is recruited to hunt down Sol Sixxa, the pirate who led a vicious attack on the planet Maramere.

Following on the heels of LucasArts' Starfighter video game comes Crossbones, a limited series featuring the intimidating pirate captain Nym in his own solo adventure. The story begins eight years after the Battle of Naboo and Nym is down and out on Rodia. In the hopes of earning some quick credits, Nym agrees to hunt down Sol Sixxa, a pirate terrorizing the watery world of Maramere. But first, Nym must lead a rag-tag Rodian tribe to victory in a violent clan war...