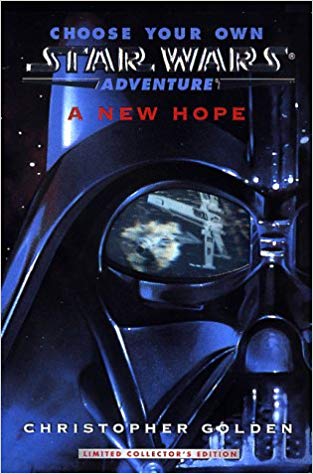 Choose Your Own Star Wars Adventure: A New Hope

Choose Your Own Star Wars Adventure: A New Hope, the first book in the Choose Your Own Star Wars Adventure trilogy, is a young readers novel by Christopher Golden, published by Bantam Skylark in 1998. It is written from the second person point of view with the reader taking on the role of Luke Skywalker's best friend, the protagonist of the story. The book features a number of points in which the reader can influence the story by deciding which page to turn to, resulting in multiple storylines and endings.

Join Luke Skywalker, Princess Leia, and Han Solo to fight against the evil Galactic Empire—only this time you control the twists, turns, and outcomes of the most exciting adventure in the galaxy. Will you help lead the Rebellion to victory against the Empire? Or side with Darth Vader and betray your friends? The fate of the galaxy is in your hands—May the Force be with you.