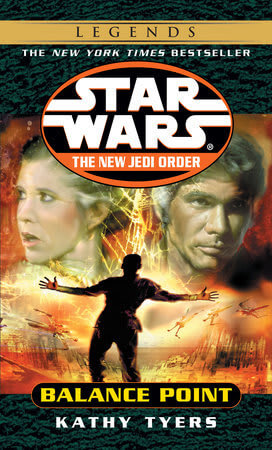 By
Kathy Tyers
Released
Oct 31, 2000
Artwork by
Narrated by
Michael Cumpsty
Takes place in
26 ABY
In the
New Jedi Order
era
Part of the
New Jedi Order Series
Collects
Good
7.3
7.3
7.3
An enjoyable NJO entry that has considerably less impact on the series as a whole.
Community Rating
#
181
in the
Youtini Reading Order

Publisher's SummaryBooks in this SeriesYoutini ReviewVideo ReviewStaff ReviewsCommunity ReviewsVideosCollections
One of the five hardbacks of the New Jedi Order, Balance Point primarily revolves around the Battle of Duro. It also includes interesting points that propel the story into the future—Jacen's vision of the future, Leia kidnapped by Warmaster Tsavong Lah, and Jacen having to cross the precipice into embracing his calling as a Jedi.

In the aftermath of one tragedy, will a young Jedi’s search for redemption lead to yet another?

There is no place else to channel the flood of refugees fleeing the murderous Yuuzhan Vong but the overcrowded planet Duro, poisoned by centuries of technological excess. Fortunately a deal is struck: In exchange for a new home, the refugees will work to restore the planet to health, under the watchful eye of Leia Organa Solo.

While tempers flare between the Duros and the New Republic, Han Solo, his son, Jacen, and the Ryn called Droma arrive to keep the peace. They are unaware that Leia is on Duro . . . and that Luke, Mara, and Anakin are on their way, searching for a missing Jedi apprentice. And none realize that the Yuuzhan Vong have chosen this embattled planet as the next target in their brutal coreward thrust.

Now, as the fragile stability on Duro threatens to collapse into violence, Jacen Solo must face his greatest dilemma: At what point does the use of power become aggression? Whatever he decides, his next step could tip the galaxy’s destiny toward the light or toward darkness–with the life of someone he loves hanging in the balance . . .

Andrew Bell
Video Department Coordinator
There are a handful of books in the NJO that just feel out of place, and this is one of them. Which is not necessarily a bad thing. While the other books tend to span a handful of different worlds have have huge consequences, Balance Point is essentially a "bottle episode" that takes place on Duros and primarily features the Solo/Skywalker clan. I think its fair to say that the strength of this series lies not in its plot, but in the progression of our beloved characters.