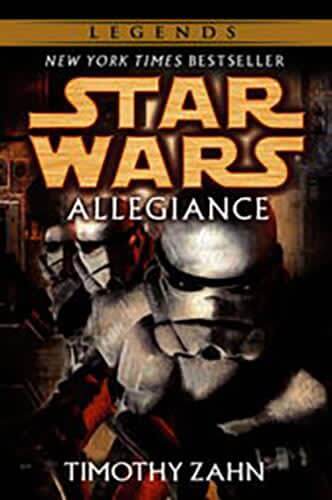 By
Timothy Zahn
Released
Jan 30, 2007
Artwork by
Narrated by
Marc Thompson
Takes place in
0 ABY
In the
Rebellion
era
Part of the
Collects
Good
7.8
7.8
7.8
Community Rating
#
83
in the
Youtini Reading Order

Sometimes allies are found in the most unexpected places. New heroes of the Rebellion, Luke, Han, and Leia learn this lesson when they team up Daric LaRone and his group of defecting stormtroopers to take on pirates who are threatening supply lines of both the Empire and the Rebellion. However, the unlikely allies are not the only ones on the trail of the pirates. Mara Jade, Hand of the Emperor, is also on the way and may have a very different opinion about how things should turn out once the pirates are caught...

Never before has the incendiary mix of action, politics, and intrigue that has become Timothy Zahn's trademark, been more evident that in this new Star Wars epic. On the heels of the stunning events chronicled in Star Wars: A New Hope, the newly minted heroes of the Rebellion - fledgling Jedi Luke Skywalker, smuggler turned reluctant freedom-fighter Han Solo, and Princess Leia Organa, a bold leader with a world to avenge - must face the harsh realities of the cataclysmic conflict into which they have so bravely plunged. From this point forward, legends will grow, treachery will abound, and lives will be irrevocably altered, in the long, hard fight to counter the fist of tyranny and restore hope to a galaxy too long in darkness.

The destruction of the Death Star by the Rebel Alliance was a decisive blow against the Empire, but Palpatine and his monstrous enforcer, Darth Vader, are no less of a threat. The brutal extermination of Alderaan not only demonstrated the magnitude of their murderous power, but served as a chilling testament to their resolve to crush the Rebel uprising. Standing against them, Skywalker, Solo, and the Princess remain uncertain opponents. Luke is gifted and brave, but unschooled in the power he possesses. Han has doubts about waging someone else's war - and his contentiousness is one more burden for Leia to bear as she struggles to help keep the Rebellion alive. The three have been sent to mediate a dispute between Rebel Alliance factions in Shelsha Sector - agitating matters by forcing Han to deal not only with pirates, but with his more dreaded enemy, politics. At the same time, Mara Jade - all of eighteen and years away from her fateful meeting with Luke - is serving her evil master, Palpatine, well in her role as the Emperor's Hand: tracking suspected treachery in the Empire to what may be high places - while trying to stay out of Darth Vader's way.

But the Rebels will prove to be only one of the Empire's concerns. For Imperial Stormtrooper Daric LaRone, his faith in the Empire shaken by the wanton destruction of Alderaan, will commit a sudden and violent act of defiance, and take four other enforcers with him, in a desperate bid to elude their masters' wrath.

Each of these fateful actions, whether sanctioned, secret, or scandalous, will expose brutality and corruption, spur upheavals destined to shake the Empire to its core, and shape momentous events yet to come.

Andrew Bell
Video Department Coordinator
In typical Zahn fashion, Allegiance is full of the twists and turns reader have come to expect from his writing. Fans of Mara Jade will not be disappointed, as we get to see her operate while still serving as the Emperor's Hand. This is also a unique Star Wars story in that we get a glimpse into the lives of the men who reside inside of those white-domed stormtrooper helmets.

Jared Mayes
Legends Lookback Lead Host
Renegade stormtroopers. Pirates. Mara Jade. Timothy Zahn. What's not to love? While Allegiance isn't quite one of Zahn's best books or a very consequential read in the Legends timeline, it's a classic Original Trilogy-era book with Han, Luke, and Leia on a mission for the Rebel Alliance as their paths cross with these morally-grey misfits. While the plot can be a bit convoluted at points, it's a definite must-read if you're dying for more time with Mara Jade!

Meg Dowell
Editor-in-Chief
Mara Jade is quickly becoming one of my favorite female characters in the legends timeline, and Zahn does a fantastic job developing her character in this book among other things. I love this awkward part of the timeline when Luke has no idea what he's doing, Han and Leia will grasp at any opportunity to passive-aggressively annoy each other, and Darth Vader & Co., fresh off losing an entire Death Star, are scrambling to keep it together. As always, Zahn perfectly mixes action-packed sequences with quieter moments that still make it impossible not to keep turning pages. If you're a Zahn fan in any capacity, you'll have a blast with this one.