Star Wars Adventures 1 is the upcoming first issue of the Star Wars Adventures comic series. The comic will be written by Michael Moreci and Nick Brokenshire, illustrated by Nick Brokenshire and Ilias Kyriazis, and released by IDW Publishing. The comic was originally solicited for May 20, 2020[2], but due to the COVID-19 pandemic, IDW Publishing ceased publishing starting in May 2020. The comic was eventually resolicited for June 24, 2020

An exciting new era begins! Each issue in this monthly series will feature two stories starring all your favorite Star Wars characters! In the wake of the events of The Rise of Skywalker, Rey, Poe and Finn aren't finished fighting the First Order. Plus, an all-new tale of everyone's favorite droid bounty hunter from The Empire Strikes Back–IG-88! (With apologies to 4-LOM.) 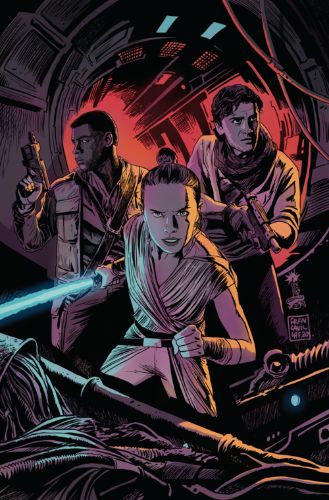 Between the events of The Last Jedi and The Rise of Skywalker, Poe and Finn have taken Rey to a remote planet to continue her Jedi training. But they're surprised to find that the First Order's reach extends far and wide.