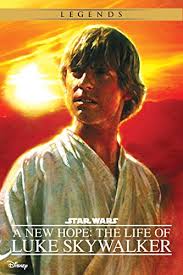 A New Hope: The Life of Luke Skywalker

By
Ryder Windham
Released
Sep 1, 2009
Artwork by
Narrated by
Takes place in
15 BBY - 4 ABY
In the
New Republic
era
Part of the
Collects
Community Rating
#
in the
Youtini Reading Order

Hidden away at birth, he would believe himself an orphan. Watched over by a mysterious hermit, he would discover incredible abilities. And by finding hope where others found only evil, he would restore balance to the galaxy.

This is the legendary story of Luke Skywalker, from his childhood on Tatooine to his fierce battle with his toughest enemy—himself.

While accompanying Princess Leia to the world of Aridus to convince the native Chubbits to join the fledgling New Republic several months after the Battle of Endor, Luke Skywalker looks back on his life up to that point.